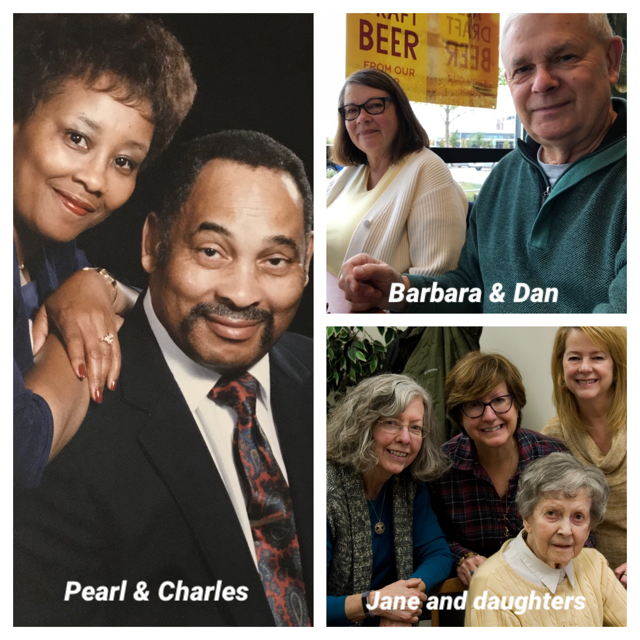 Jane, 90, has Alzheimer’s disease and lives in a community based residential facility in Milwaukee. In March, one patient there tested positive for COVID-19 and was hospitalized. On March 13, the federal government restricted all nursing home visits after President Trump declared a national emergency. Jane’s facility banned all visitors, and she was abruptly cut off from her family.

Jane’s daughter, Mary, 64, said it was already tough before the outbreak, but it’s tougher now. She has been able to speak with her mother by phone, but it’s not the same.

“My mother can’t really carry on a conversation,” Mary said. “I miss the emotional connection. It is very painful thinking of her there.”

Jane used to enjoy regular visits with her three daughters and granddaughters.

Mary said that the facility hopes to set up Skype calls soon, and this is positive, but she but wonders about how her mother may react to technology.

In the past, Jane did not participate in social activities with other residents. The thing she likes to spend her time on is word search puzzles. “It’s the only thing she has,” Mary said. The challenge for the family now is to keep her supplied with word searches. They purchase books of the puzzles, and one of Jane’s granddaughters drops them off at the front desk with a note on exactly where to put them in her grandmother’s room so she will notice them.

Mary said she is grateful to the staff.  But she is also worried because they have even more to do since the outbreak, and that means there is less time for them to be with the residents.

Mary has been watching videos from dementia educator Teepa Snow to help her cope. She worries how long the pandemic may last and how widespread it may become. But she has hope.

“My greatest hopes are that my mom has her needs met, does not become infected with COVID-19, and that we can see her soon.”

Pearl and Charles have been married for 34 years. They are in their early 80s, and Charles has dementia. Pearl cared for Charles in their home from 2008 until 2019, when things became more difficult. Charles began to experience problems walking and physical therapy wasn’t helping. Pearl assisted him as much as she could, but it became physically too demanding. In July of 2019, he moved to the dementia unit at the VA in Union Grove, Wisconsin, 35 miles from their home.

Pearl said she is satisfied with the care at the VA for her husband.  They provide good care, many activities, and a pleasant atmosphere.

Before the coronavirus outbreak, Pearl visited her husband at least twice a week. Now she can’t even go into the building. When her husband recently made a special request for saltine crackers and his favorite suckers, she put them in a ziplock plastic bag (along with a photo of the two of them from their class reunion in 2010) and placed it in the designated spot outside the VA front door.

Fortunately, Charles is able to talk to her on the phone, and she speaks with him twice a day. Pearl said, “It’s different, but I am trying to work through it.” She said the Southeastern Wisconsin Chapter of the Alzheimer’s Association and the Wisconsin Alzheimer’s Institute’s Milwaukee office have been an “inspiration” to her during this time.

Still, Pearl has found a way to visit Charles when she can. She pulls her car up near his room and rolls the window down and waves. They can see each other through his window on the first floor. Between her visits he sometimes asks her when she is visiting again. She says, “You know that memo I told you about? It says, no one in or no one out.” He says, “Oh, that’s right.”

Pearl’s biggest hope is to see Charles come back home. But she would need the proper help. “Someone would need to be here around the clock with me and I’m not set up for that.” Short of that, she hopes her health holds up so she can keep going to see him. More than that, she hopes they find a cure for the COVID-19 so that she can see him in person again.

Barbara and her husband Dan live in Brookfield, Wisconsin. Barbara has been on a slow and steady decline with Alzheimer’s for eight years. Dan is her caregiver. Barbara’s mother and grandmother both had the disease, as did two maternal aunts. Barbara was formerly a journalist, writing articles for suburban papers around Milwaukee covering local happenings, including school and village board news.

Last fall Dan bought airline tickets for March, to visit his brother in Palm Springs, one of the couple’s regular trips. Before the trip, Barbara could still eat on her own (Dan had to cut her food), get dressed (he laid her clothes out on the bed), and use the toilet. They left on March 10.  After they arrived, news about the potential dangers of travel and the looming pandemic in the U.S. started to go into high gear. Dan’s worry grew every day. He called the airline and got a return flight for the two of them on March 14.

Dan didn’t feel well when they returned. He had tightness in his chest and a cough. A day or two later, Barbara also got sick. On April 1, he took her to the ER. She was admitted and in the hospital for two nights. She had a urinary tract infection and her blood oxygen was low. They tested her for COVID-19, and the results were negative.

After she was home for a couple of days, there wasn’t much improvement and it seemed like her dementia had worsened significantly. Dan called their family physician. The doctor reviewed all the data on Barbara from the hospital. She said that there are 30% false negatives on COVID-19 tests. The data was shared with an infectious disease specialist and both doctors agreed that Barbara likely had COVID-19. He was told he should monitor her carefully, and they are now observing the 14-day quarantine for people who have illness.

Before they left for California, the pair had an active social life that included church, an adult day program and art class for Barbara, and participation in the Amazing Grace Chorus (for people with dementia and their caregivers).

Another big change is that Barbara now almost totally dependent on Dan. He believes that COVID-19 has led to this change, and he hopes that this will improve when she recovers. However, he’s worried that the lack of stimulation and activity since she’s been sick will cause her cognitive decline to be permanent. He’s also concerned about her physical health. She sleeps a lot.

Every two to three days Barbara and Dan do a video chat with her physician. The doctor has told him to watch for fever and tightness in her chest. He is relieved neither symptom has yet to appear.

Dan has two hopes. Short term, he hopes that the two of them can get through the direct impact the virus has had on them. Longer term, he wants to make sure he outlives Barbara, so that he can continue to care for her.  He said, “I need to stay healthy, functioning and alive.”