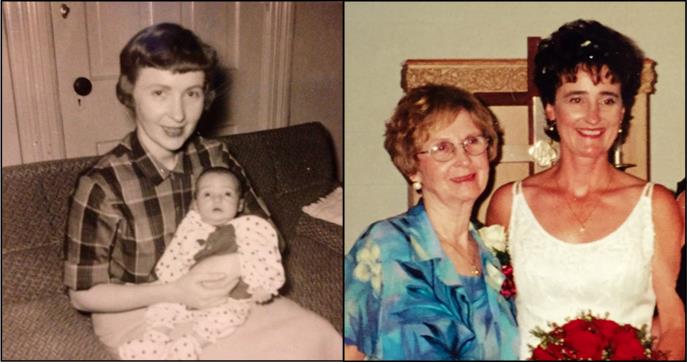 My mother was diagnosed with Alzheimer’s in the spring of 2001. My father called me earlier in the year saying she was having trouble completing her sentences – she could not remember the words she wanted to use. I made the 40 minute trip to visit and saw for myself. We knew something was wrong, but we weren’t sure what it was. It got worse. We took her to see a neurologist who had her complete a short memory test. She answered only about half of the questions correctly. That was shocking to both of us. While it wasn’t definitive, the neurologist told us it could be Alzheimer’s or another form of dementia. Later the suspicion was confirmed when an MRI showed her hippocampus (the part of the brain that is involved in forming, organizing and storing memory) to be small – much smaller than it should be, a telltale sign of Alzheimer’s.

That summer my dad and I went to a class on Alzheimer’s at the local hospital, so we could learn more about the disease. That’s also where I learned about WRAP, a research study of adult children of people with Alzheimer’s. I signed up and began traveling to Madison, Wisconsin every two to three years to be tested. The seven years of my mother’s decline and eventual death from Alzheimer’s disease was one of the worst things my family and I have ever been through.

Because of my personal experience and the difficulties my family faced in caring for my mother, I want to tell the story of how this disease affects families. I want to convey accurately where we really are on the path to a cure. Over the 17 years since my mother was diagnosed, I’ve read many headlines that purported a new drug was around the corner. But it’s 2019, and there still is not a cure. All the clinical drug trials performed in a 10-year span earlier this century have failed. That is the headline. In addition, there’s still a stigma associated with this disease. Support for caregivers has improved, but families still face isolation and a myriad of other challenges. And other than everyone acknowledging this disease is scary, no one wants to talk about it. Documentaries to date that have focused on Alzheimer’s research have mostly not done so in a personal way. While people with the disease and their families have sometimes been included, this angle on research has rarely been seen woven into the story. I want to show it like it is – the full 360-degree view including the research component. I want to engage audiences so that they think and feel differently about Alzheimer’s, including with realistic hope.

There are reasons to be hopeful. For example, there are things anyone can do right now to make a difference and help get to a cure more rapidly.  For example, there’s an urgent need in Alzheimer’s disease research for more people to join clinical trials. According to the Alzheimer’s Association, “Without clinical trials, there can be no better treatments, no prevention and no cure for Alzheimer’s disease.” Participants being sought include individuals with the disease and healthy individuals. According to the National Institute on Aging at NIH, at least 70,000 volunteers are needed to participate in more than 175 clinical trials and studies in the U.S. alone. However, to reach that goal, more about 700,000 potential volunteers will need to be screened. Our film takes an intimate look at one research study and the life experiences of the people in it.

Mom, I continue this journey to make this film with my wonderful colleagues on the team, in memory of and with love for you.